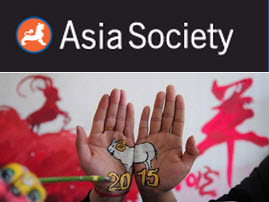 Renowned economists, investment analysts and scholars gather together for a high-level discussion on macroeconomic trends and future prospects in China. We ask for 2015:  Will China be the engine for growth or will its slowdown prove a global economic millstone? Can China propel itself beyond the middle-income trap? Can its leadership decisively wean the economy away from the old drivers of growth?  Speakers include Jack Wadsworth, Honorary Chairman, Morgan Stanley Asia. More Info.
This Asia Society event is co-sponsored by the 1990 Institute, along with Cal-Asia Business Council, ChinaSF, Federal Reserve Bank of San Francisco

Please join us for The 1990 Institute’s first event of our 25th Anniversary year!
The limited seats will sell out fast, so buy your tickets today! Join us for a family affair — a delicious CityView dim sum brunch and a lively fireside chat with one of our Youth Voices On China (YVOC) father & son judging teams.
oo
In this special conversation, Jeff Yang will explore how this moment may be a pivotal time for Asian Americans on screen — and in broader global society. He’ll also share a preview clip of the forthcoming ABC series Fresh Off the Boat, starring his 11-year-old son Hudson Yang, followed by a brief discussion between the two and then audience Q&A.

Jeff Yang is the Futures Company’s multicultural consumer insights guru. As also Wall Street Journal’s Tao Jones columnist, he regularly writes about the rising impact of Asian culture, ideas, media and products in the U.S.  Check out his “Stage Dad Diaries” pieces on the Hollywood journey with Hudson.

Fresh Off the Boat (FOTB) is the second Asian American family comedy on ever network primetime and is the TV adaptation of celebrity chef/multimedia personality Eddie Huang‘s best-selling childhood memoir.  This comedy by Nahnatchka Khan (American Dad)  follows the hip-hop loving young Eddie (Hudson Yang) and his family as they move from Washington D.C.’s Chinatown to suburban Orlando in 1995 — the setting of a culture clash.
Catch the premiere on ABC on Tuesday February 4 at 8:30 and 9:30pm, as well as Wednesday February 10 at 8pm, its regular timeslot premiere.
P.S. Don’t miss the how chef Eddie Huang is already stirring up controversy with the FOTB show, which is based on his book “Fresh Off the Boat:  A Memoir.  .
This event is co-sponsored by The Asia Society.

Support The 1990 Institute:  Get the Linsanity DVD

Remember what it feels like to be young, inspired, and full of dreams?

Remember what it’s like to have just armed yourself with the values of education, community, and teamwork with the    whole world ahead of you?

The rise of NBA player Jeremy Lin to Linsanity prominence was an unexpected one, but it’s an amazing tale of what can happen when preparation meets timing.
oo

Add the Linsanity DVD to your media collection!

Get them as gifts to your family and friends!  Add it to your Chinese New Year bundle of gifts!

With each purchase, a portion of the sales proceeds will be donated to The 1990 Institute.  Get yours today!

For volume pricing on 10 units or more, email us at info@1990institute,org

We are currently sold out of seats for this event.

We will be happy to place you on our waitlist, as we will likely have a few cancellations, or will attempt to make a few extra seats available, if circumstances allow.

Please email us at events@1990institute.org with the number of seats you’re interested in, or with any questions.

Thank you for your kind donation to the 1990 Institute. We will follow up with you with additional correspondence regarding your donation.

Please contact us at info@1990institute.org, should you have any further questions.

Thank you for your purchase.

If you purchased DIM SUM BRUNCH  tickets, they will be held at WILL-CALL under your name.

If you purchased Linsanity DVDs, they will be shipped separately, unless otherwise notified.

For any questions, please email us at events@1990institute.org